When Lenka Danson and her husband Kurt discovered they were pregnant, the Nerang locals were overjoyed to be giving their daughter Kaitlyn a much-loved sibling.

Yet little did Lenka and Kurt know how incredibly difficult and frightening the journey ahead would be.

At the 12-week scan, Lenka was surprised to hear not one, but three precious heartbeats.

“I was in complete shock,” Lenka said. “Initially the sonographer predicted the genders of our babies were two girls and one boy, but we later found out we were expecting identical triplet boys.”

The excitement of adding three beautiful sons to their family quickly turned to panic when doctors warned about the high risk complications Lenka would inevitably face.

“Everything that could have gone wrong in a multiple pregnancy, did go wrong,” Lenka said.

Lenka’s pregnancy was plagued by a serious condition called twin-to-twin transfusion syndrome, which affects identical twins and triplets that share one placenta.

An imbalance in the amniotic fluid and the placenta’s blood supply meant that baby Phoenix was much smaller than his identical brothers, Noah and Lyrik.

“Phoenix had the least amount of fluid and his umbilical cord connected abnormally to the placenta so he wasn’t receiving enough nutrition to gain weight,” she said.

The surgery was risky, yet crucial to giving little Phoenix a fighting chance of survival.

“There was a 20 per cent chance the procedure wouldn’t be successful and I would go into premature labour due to the blood flow in the placenta being disrupted,” Lenka said.

While the surgery was successful, the triplets threatened to arrive sooner than expected when Lenka suffered premature rupture of the membranes nine weeks later.

“I was immediately admitted to hospital to monitor the babies and I managed to carry the boys until I was 28 weeks,” she said. 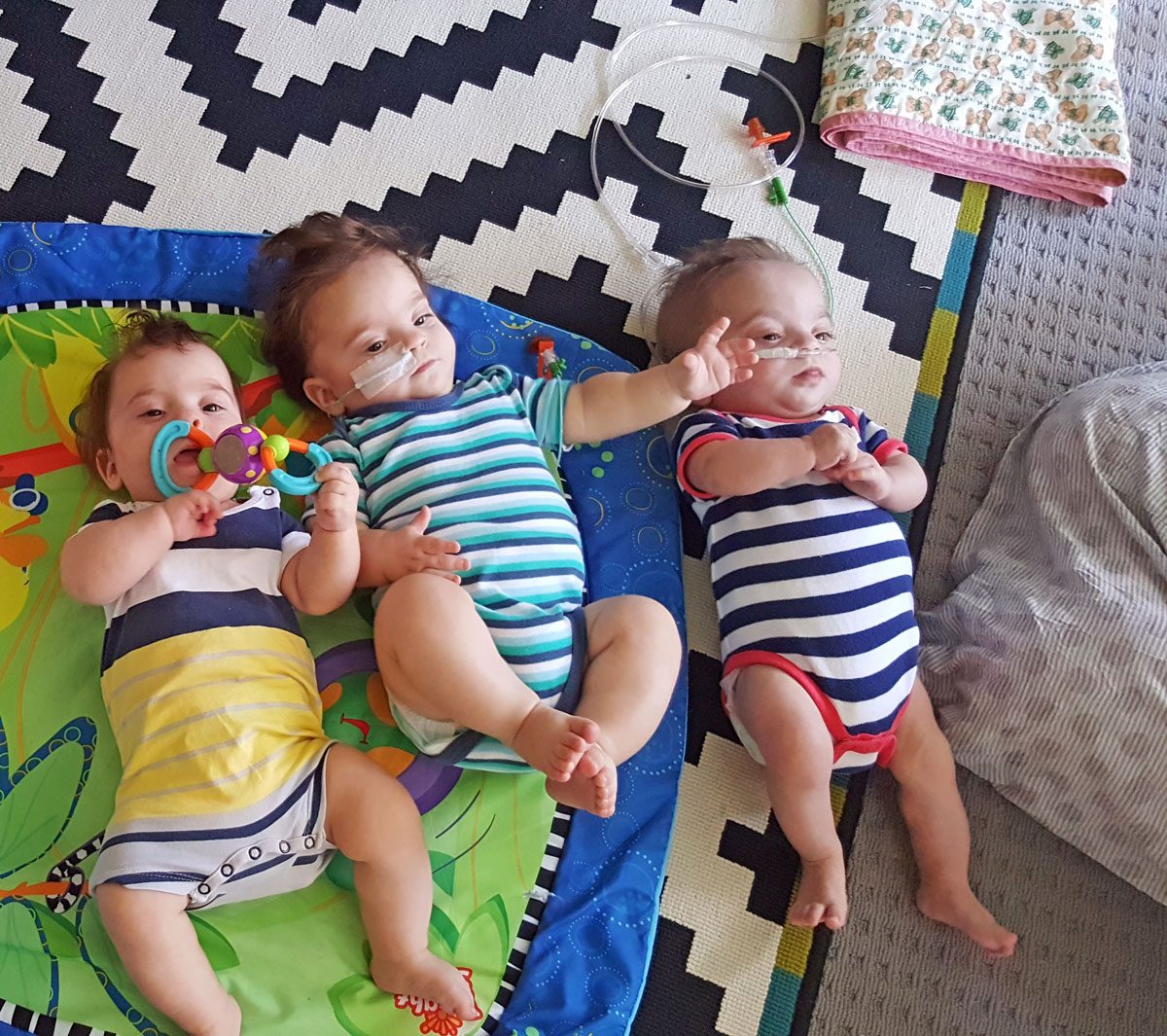 They were diagnosed with a congenital heart defect and a serious eye disease affecting their vision. The triplets also struggled with immature lungs and needed a ventilator to help them breathe.

Phoenix in particular was so sick and fragile that he couldn’t be moved to the operating theatre for emergency surgery on his small intestine when he was only 15 days old.

Incredibly, surgeons brought the operating theatre to him and performed the lifesaving surgery in his bed in the Neonatal Intensive Care Unit.

Phoenix was the first baby at Gold Coast University Hospital to have a specialist operation in his room.

Lenka and Kurt are extremely grateful to the Gold Coast community for allowing their three premature sons to receive the best care locally.

“I feel so blessed that people are giving back to Gold Coast Hospital Foundation to help buy equipment and provide services,” Lenka said.

“We’ve had the biggest support you could imagine. The quality of care and treatment we’ve received on the Gold Coast is unbelievable. Every medical team has worked together to find the best solution for our boys.

“This ordeal has been a nightmare for our family, but being able to stay close to home has helped make a very difficult time more manageable.”

Despite their troubled start to life, generous supporters of Gold Coast Hospital Foundation helped give all three babies a chance at life.

“Thank you for giving my babies a future,” Lenka said. “There are many more families who need help, so please be as generous as you can. Every donation helps.”

Now aged two, the Danson triplets are still under close observation and return to hospital frequently for ongoing physiotherapy, occupational therapy, speech pathology and appointments with a dietitian. 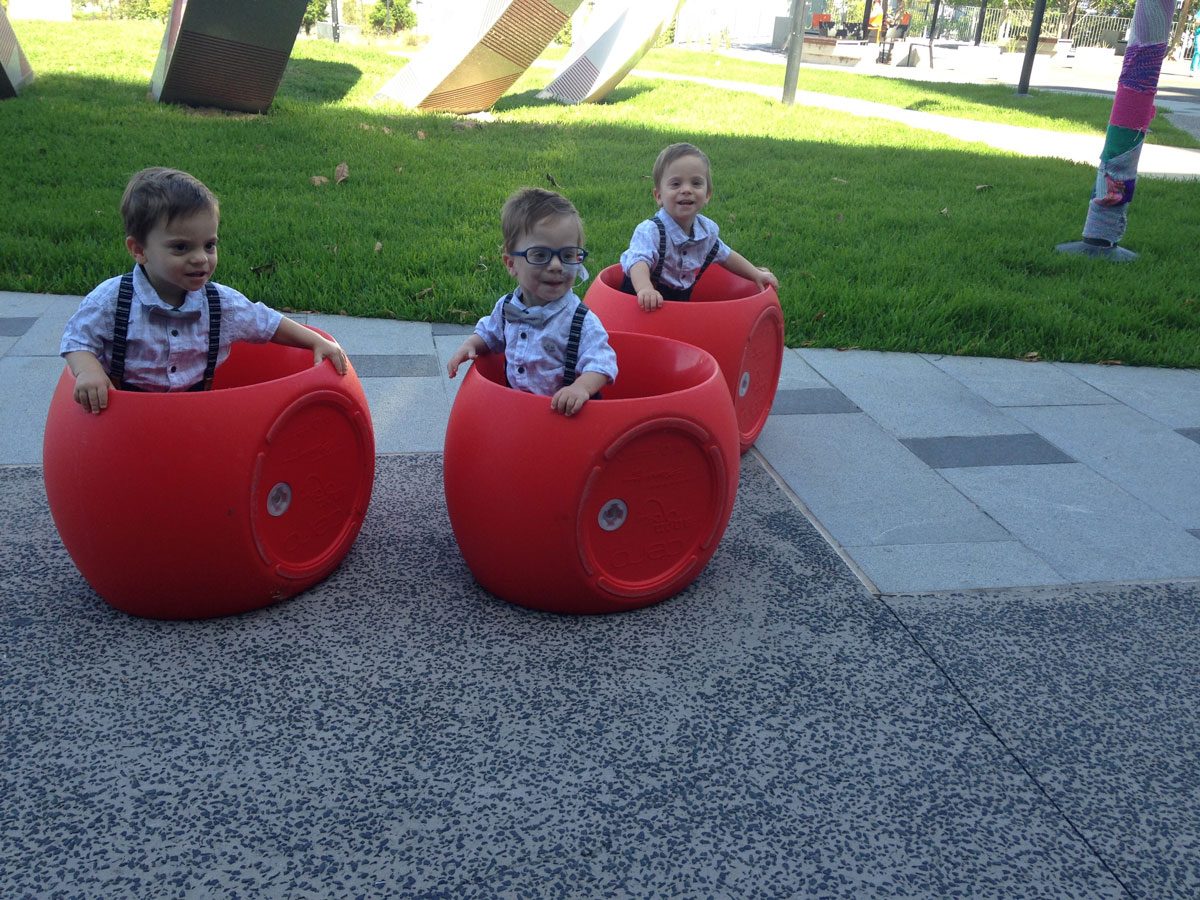 But Phoenix, Noah and Lyrik have made remarkable improvements on their long road to recovery – they are walking and thankfully avoided permanent vision loss.

“We didn’t know what the outcome would be for our boys or if they would survive, especially when Phoenix became so sick,” Lenka said.

“But they are all doing really well.

“Phoenix, Noah and Lyrik are true miracle babies. They are our little fighters.”

Please today to help other patients and their families during times of medical crisis.