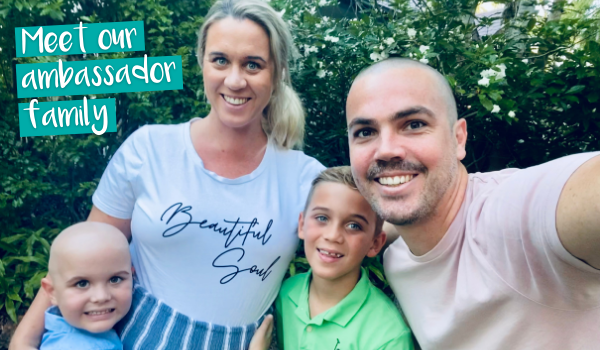 Just four days before Chase’s Leukaemia diagnosis, his parents had told Chase and his brother, Hudson, they were going to be big brothers.

“It was on a Wednesday evening.” Then four-year-old Chase came to his parents’, Tatum and Billy’s, room in the middle of the night troubled by a sore neck.

Chase had played in his first under eights tennis tournament on the Sunday before for four hours. Tatum and Billy thought his sore neck may be related to the tennis or he may have an ear infection, but they were not overly worried at this stage.

Tatum was 12 weeks pregnant at the time and the following day her new baby’s ultrasound scan was booked. After trying for another baby for some time, the family were so happy and so excited about becoming a family of five.

“We were a normal, happy, healthy family with not the slightest clue of what the future had in store for us.”

Immediately following the baby scan, Tatum attended a local doctor with Chase as a precaution after she discovered a lump on his neck. Tatum recalls the doctor asking questions related to Chase’s weight and night sweats. The doctor suggested he was concerned about Lymphoma and requested blood tests.

Tatum recalls almost laughing it off. “Chase was fine. He was not sick. He was energetic and had even run a cross-country event the previous weekend.”

After completing the requested ultrasound and blood tests, the following Tuesday the family would be told by the doctor to pack their bags and head straight to Gold Coast University Hospital.

“Go straight to emergency. They are waiting for you.”

Tatum recalls almost passing out soon after she heard the devastating news. After the pure elation of giving her boys the news about their new baby brother to this crashing low. At around 9pm the Head of Emergency informed Tatum and Billy, Chase had acute Lymphoblastic Leukaemia and needed to begin intensive treatment in Brisbane now.

For the next five weeks, because of the COVID-19 situation during 2020, only one parent could stay with Chase at a time. Billy and Tatum, striving to keep their family together, alternated days staying by Chase’s side in the hospital and caring for Hudson, Chase’s adored older brother. Hudson and Chase suffered a great deal during this separation. Hudson could only wave up to his brother’s window from the park below. Caring deeply for his younger brother and being seven years old, Hudson is old enough to understand what is happening to Chase.

Billy describes the whole experience as surreal. Looking back, he remembers taking life from day to day.

“I survived today. Then, you survive tomorrow as well. Before you know it, you’re six months, or a year in. You just survive day to day.”

Tatum and Billy endured the stages of grief together. There were lots of tears. There were times when they were angry also.

“You’ve just got to keep going.”

There was a time, during his treatment, when Chase could not walk, he completely lost all motor ability. When he tried to kick a ball, he would fall down.

Moving back home to the northern end of the Gold Coast was stressful for the family. Chase needs to be on an IV antibiotic within an hour if he has a fever. This has happened at least six times and his hospital stays have been for a minimum of 48 hours, but often longer. On these occasions, Tatum or Billy will call ahead and on arrival they are given priority to go straight to the ward where staff are waiting for them. They feel truly blessed to have the Gold Coast University Hospital close by and the family have developed strong relationships with all the oncology staff, especially Sue Moloney and Michelle Noyce. Having the staff take great care of Chase has relieved so much pressure for the family.

On a typical day, Chase wakes up in the morning and knows he has to have his “Captain Chemo” at 6.30am. Chase has even named his port, “Richie”, after famous Australian cyclist, Richie Porte. If Chase is feeling good, he attends his Prep class and plays tennis after school. He is averaging one to two days at home per week. Chase is also working with the Physiotherapist at Gold Coast University Hospital currently.

Buy a scrub hat and help sick kids in hospital

This September, Gold Coast Hospital Foundation are raising much-needed funds to help purchase vital medical equipment, fund world-class health research and provide interactive play and sensory areas in our hospitals. Your support is needed now more than ever for kids in hospital like Chase who is bravely fighting leukaemia.

By purchasing a scrub hat or donating in September, you’ll be giving our youngest and most vulnerable patients like Chase the best possible care and support in hospital.

Donate during Scrub Up September